Must we fight? Devotional Commentary for July 19-25

4:1 Where do wars and fights come from among you? Do they not come from your desires for pleasure that war in your members?

James closed the third chapter of his epistle after introducing us to two types of wisdom and after identifying the behavioral markers that indicate which one is influencing our conducts and actions. These two types of wisdom are responsible for shaping the various patterns of our conducts, behaviors, and actions. Accordingly, while godly wisdom reflects the fruit of the Spirit, bitter jealousy and selfish ambitions mirror the attributes of earthly wisdom that is natural, carnal, and demonic.

James opens this chapter by asking why do wars and infightings take place among Christians? His question implies that should not be the case. Wars and fightings take place among Christians when the heart is devoid of peace due to momentary disharmony with the Spirit of God. Conflicts and infightings arise from contentious disagreements and envious rivalries that characterize the environment where Christians live, serve, and worship.

But these external behaviors are only indicators of the internal state of a heart infected by bitterness, jealousy, restlessness, and selfishness. These are unwholesome passions that give rise to internal turmoil resulting in disorder and confusion in Christian services and relationships. Such is the outcome of ungodly "wisdom"—a fleeting "satisfaction" obtained by bitter jealousy and selfish ambitions.

Here, James identifies a crucial attribute of an ungodly heart that is driven by selfish desires. A tumultuous heart is driven by carnal operatives which constantly stir up selfish desires to satisfy the fleeting demands of the flesh. Therefore, the drive to prevail, the urge to satisfy the passions of the flesh, or the desire to pursue more pleasure impels the believer to summon all of the hostile forces of the old nature and assail the New Man and the community of faith with bitter contention or strife.

Fulfillment is never attained when prayers are offered with ungodly motivations. When one seeks to gain from one's own resources through one's own means, one plays God in one's own life. No one receives answers from God when prayers are offered to appease selfish desires, resisting God and disregarding His Will and sovereign Authority. Since anything done without faith is displeasing to God, prayers offered contrary to the Will of God fall far short of God's favor. That is:


We just ask but do not pray. Hence, we do not receive.

4:4-5
4Adulterers and adulteresses! Do you not know that friendship with the world is enmity with God? Whoever therefore wants to be a friend of the world makes himself an enemy of God.
5Or do you think that the Scripture says in vain, "The Spirit who dwells in us yearns jealously"?

James confronts his audience with increasing fervor, asking the obvious. Is it not apparent that love for this world means animosity toward God? It is blatant unfaithfulness. It is idolatry. Care for this world means indifference toward God. Choosing the world means showing a more favorable disposition to the world than toward God. No one can love or serve both God and the world at the same time, with the same resource, from the same heart. Committing one's love of God to the world is outright spiritual adultery. Withholding one's allegiance to God is self-centered and treasonous. It is grieving to the Holy Spirit and displeasing to God.

Because affinity with the old nature is disharmony with God, the believer's relationship to God suffers tremendously disabling the ability to love and serve as a loving and obedient servant of God. James depicts this behavior as adulterous because Christians guilty of such practice trade their close relationship with God for a fleeting intimacy with the world. Such behavior is contrary to the Scriptures which affirm God's unfailing love toward His children whom He redeemed with the precious blood of His Son.

4:6 But He gives more Grace. Therefore He says: "God resists the proud, But gives Grace to the humble."

Having clearly identified the root cause of conflicts and turbulences in a Christian's life, James directs the believer to the redeeming hope of God's restorative Grace. This Grace is given abundantly to those who humble themselves and receive God's gift of restoration. But those who strive to satisfy their selfish ambitions remain in disharmony with God. God is gracious and Just. He restores the humble and the penitent. But He chastens the arrogant and the proud, and holds them accountable.

The closing verses of James chapter Three outline the characteristics of the mature Christian whose life personifies a Spirit-given wisdom. But chapter Four opens with the description of the adulterous Christian whose life is characterized by unfaithfulness, turmoil, strife, pride, and immaturity. The question before us is then: Which of these two wisdoms best describes our individual lives, our communities, and our churches? Are we in a state of confusion and strife, or, at peace in God in our own hearts and with one another?

If a chronic infighting persists, then we remain mired in the snares of the old nature. We are not anchored in the wisdom from God. We live deprived of the joy of our salvation. Instead of peace, there is strife. Instead of gentleness, there is conflict. Instead of mercy and righteous fruits in our service, love, and care toward one another, there is lust, murder, covetousness, and selfishness. Instead of being humble, we are proud, condescending, and arrogant. Instead of loving and giving, we are selfish and greedy. Such conflicts plague Christian fellowship because they feed upon the selfish desires within us.

James is talking to the Body of Christ, individual believers who are called to be the building blocks of the church. Regrettably, his observations expose the disunion caused by our infightings and our inability to come together as one with the singleness of Mind and Body headed by Jesus Christ.

We are held together by one Body, one Head, one Cornerstone, one Spirit, one Lord, one Savior, one Faith, one Baptism, one Hope, one Calling, one Truth, one Life, one Love, one Peace, one Destiny, one Forgiveness, one Promise, one Cross, one Resurrection, one Father, one God—all from God in Jesus Christ. But the evidence is plain for all to see. The indictment is legitimate. Much of the Christian community reflects a chronic self-serving carnality that James describes in this passage. We have become like those who make the world their friend and draw away from God as if He is their enemy. It seems we have taken our cue from the wrong source, our old nature.

As Christians, we must realize that salvation is not confined just to the security of our eternal home. We should not view it simply as a destiny-insurance. There is a new life that must be lived here on earth for Christ, by Christ, and in Christ for the glory of God. To live-on as the redeemed child of god is to be steadily sanctified individually by the Holy Spirit. To live as the child of God is to let the Fruit of the Spirit in us obliterate the ungodly traits of the old nature. To the Christian, to live is Christ, and to die to the old nature is gain. 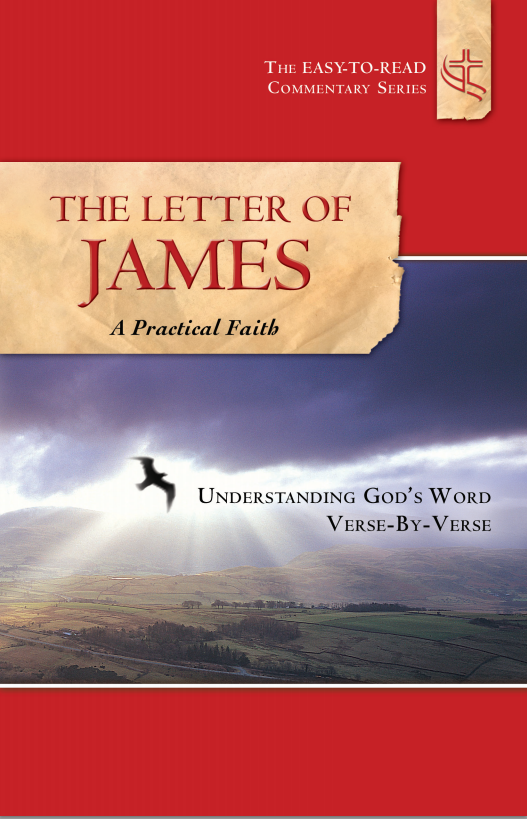