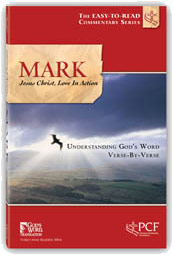 The Gospel of Mark is the eyewitness testimony of Jesus Christ, love in action.

In the Gospel of Mark, the Messiah is portrayed as energetic and tireless, as He proceeds from event to event, constantly revealing physical evidence of His position as both. Son of Man and Son of God. Mark relates fewer of Christ’s many sermons and discourses than the other Gospels and instead focuses on the Lord’s actions as He heals the sick, casts out demons, and confronts His opponents.

The Gospel of Mark offers a practical narrative of Christ's life and ministry on earth full of drama and urgency that filled Christ’s time on earth. Jesus Christ: love in action.

1:21 Then they went to Capernaum. On the next day of worship, Jesus went into the synagogue and began to teach.

Jesus, with His four willing disciples, traveled to Capernaum, very near the north shore of the Sea of Galilee. We do not know when they arrived in this Galilean city, but we do know that He immediately entered the synagogue on the Sabbath.

It was not unusual for a Jewish man to enter the synagogue on the Sabbath. It was unusual that Jesus entered the synagogue and assumed the position of teacher or, in the Hebrew, “rabbi.” Throughout biblical literature and the writings of the early church fathers, we have no indication that Jesus had been trained as a rabbi. He was certainly reared in the Jewish tradition and at an early age showed His thorough knowledge and understanding of the Scriptures. At the age of twelve, He sat with the teachers and amazed them with His understanding: “46Three days later, they found him in the temple courtyard. He was sitting among the teachers, listening to them, and asking them questions. 47His understanding and his answers stunned everyone who heard him” (Luke 2:46–47). However, for someone to enter the synagogue and assume the position of rabbi would be offensive to the Jewish mind, particularly to the ruling scribe or rabbi.

1:22 The people were amazed at his teachings. Unlike their scribes, he taught them with authority.

Apparently, when Jesus began to teach, the people accepted Him as their rabbi, and they marveled at His teaching. He taught them with authority, unlike the scribes and Pharisees. Of course, recalling Mark’s opening statement that Jesus Christ is the Son of God, we know that He could address His audience with authority because He knew the answers to their questions.

On the other hand, the scribes based their teaching on a discussion of Scripture by using an argumentative style, which led to much debate on what a certain word or phrase meant. More often than not, no conclusions were drawn, so traditionally, the people attending synagogue left with little learning or no understanding of the passage discussed. In contrast, Jesus taught with full wisdom and understanding of the truth, providing firm conclusions to the meaning of the Holy Scriptures.

1:23 At that time there was a man in the synagogue who was controlled by an evil spirit. He shouted,

A man in the audience had an “evil spirit.” Although this man might have exhibited strange behavior, the community allowed him to participate in the life of the synagogue. It is hard to understand the reason for his inclusion in the community, for the Greek word used to describe him, ajkaqavr t w/ (akathartow), really means that he was ceremonially unclean.2 Thus, he should have been considered unacceptably defiled according to Jewish law. Perhaps, others were unaware of his condition. In other contexts, this word implies a strong moral component, likely referring to sexual impurity. It could be argued that this man did not exhibit strange behaviors but had a secret lifestyle that went unnoticed in the congregation, which would account for his participation in their congregational life. However, as we will read, this man’s problem ran much deeper.

1:24 “What do you want with us, Jesus from Nazareth? Have you come to destroy us? I know who you are—the Holy One of God!”

The man blurted out a derogatory statement against Jesus. It is possible that some in the congregation agreed with this declaration. After all, Jesus was not an ordained rabbi and might have been perceived as an imposter. Since His teaching was radically different from that of the other scribes, some might have seen Him as a threat to centuries of Jewish tradition.

Nevertheless, the final part of the declaration, “I know who You are—the Holy One of God,” identified this teacher as God’s Anointed, the Messiah. What was this? This man first challenged Jesus’ self-assumed position and then declared Him to be the Messiah. Even the demon(s) recognized Jesus for Who He was. By this time, many of the observers probably saw the man as deranged.

We do not know if Jesus even raised His voice in response to this outcry. The Greek word for “keep quiet” is ejpe t ivmh sen (epetimasen), which denotes an imperative command.3 This is the same word used in Luke 8:24 when Jesus calmed the stormy sea. Jesus did not chastise or argue with this unclean spirit. He simply commanded the spirit to be quiet and to depart from the man.

1:26 The evil spirit threw the man into convulsions and came out of him with a loud shriek.

Up to this point, it is likely that many simply observed this altercation between Jesus and a member of their congregation with some trepidation. It appeared as though the man were in control of his faculties; he had simply challenged Jesus. However, when Jesus commanded the spirit to leave the man, the spirit caused the man to have a convulsion. Now, it became evident to the congregation that he was not in charge. When Jesus spoke, the spirit cried out with a loud voice and left the man.

1:27 Everyone was stunned. They said to each other, “What is this? This is a new teaching that has authority behind it! He gives orders to evil spirits, and they obey him.”

First, the congregation was astonished by Jesus’ teaching because of His authoritative method of discussing the Hebrew Scriptures. Now, they were even more amazed because He not only spoke with authority, but He also acted with authority. Even demons obeyed this rabbi’s commands because no “evil spirit” can withstand the command of Jesus.

The congregation now had clear evidence that this rabbi could be compared with no other. Their mouths hung open in amazement because of the expulsion of the evil spirit. Jesus had earned the right to teach and to be called Rabbi.

1:28 The news about him spread quickly throughout the surrounding region of Galilee.

Even the most casual observers would remember such an experience for the rest of their lives. With so many people talking about this extraordinary event, without doubt, people in the nearby regions knew about it within a few hours. As we will see, by the end of the day, Jesus rose from relative obscurity to public acclamation.

If we could travel back in time and sit among this congregation, what would our reaction have been? An unknown teacher, trailed by a band of equally unknown men, sat down in the local synagogue and began teaching, and surprisingly, the words He uttered had the authoritative ring of truth. Not only that, but when He commanded an evil spirit to depart from someone, His power and authority were unmistakable.

We have all noticed how quickly a good story flies through town. This event was no different. In fact, the interplay of supernatural powers heightened interest to a feverish pitch. Jesus caused such a stir that “the news about him spread quickly throughout the surrounding region of Galilee” (verse 28). It was one thing to hear about a man rumored to be the Son of God. It was quite another to see His divine authority in action. Suddenly, theory gave way to reality, and individuals were faced with a call of eternal magnitude: to believe or not to believe in the Son of God.

It may seem odd that Jesus was so low-key in commanding the demon to depart, but remember He had the right to be. Just as a horse may act up with a novice rider but promptly obey once its master rules the reins, the evil spirit recognized the Lord of heaven and earth. He had to flee at Jesus’ command. This is further proof of the unseen battle waged for human souls, the ancient clash between good and evil. However, as the apostle Paul wrote to the church in Rome, those who align themselves with Jesus Christ are in the hands of a loving, all-powerful God and need not fear.

31If God is for us, who can be against us? . . . 35What will separate us from the love Christ has for us? Can trouble, distress, persecution, hunger, nakedness, danger, or violent death separate us from his love? . . .

37The one who loves us gives us an overwhelming victory in all these difficulties. 38I am convinced that nothing can ever separate us from God’s love which Christ Jesus our Lord shows us. We can’t be separated by death or life, by angels or rulers, by anything in the present or anything in the future, by forces 39or powers in the world above or in the world below, or by anything else in creation. (Romans 8:31, 35, 37–39)

Such assurance gives us the courage to face each new day, as well as the “fiery darts” Satan aims in our direction.