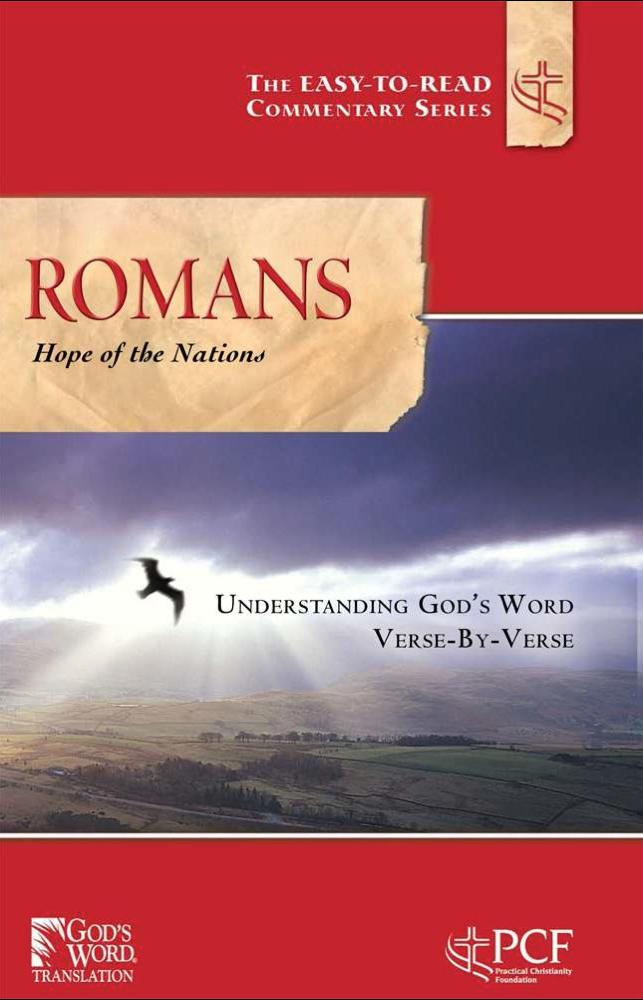 Hope of the nations

The book of Romans is a masterpiece of Christian doctrine through which the apostle Paul explores many fundamentals of the Christian faith. In this letter, Paul, the servant of Jesus Christ, affirms the reality of humanity’s fallen condition and God’s divine provision for redemption.
Through this letter originally addressed to the believers in ancient Rome, we today can peer into the clouded mirror of divine grace and glimpse the plan of redemption as sovereignly designed by the Master Potter through the life, death, and resurrection of His Son, our Lord Jesus Christ.

Book on Romans $12.99 In stock
Product description: The book of Romans is a masterpiece of Christian doctrine through which the apostle Paul explores many fundamentals of the Christian faith. In this letter,…

1:1 From Paul, a servant of Jesus Christ, called to be an apostle and appointed to spread the Good News of God.

This letter from Paul begins with his calling and credentials as a servant of Jesus Christ. He presents himself first as a servant, which comes from the Greek doulo~ (doulos), commonly used for “bondslave,” or “a person who was owned by someone else.”1 When God called him, Paul became the Lord’s willing servant. “Our message is not about ourselves. It is about Jesus Christ as the Lord. We are your servants for his sake” (2 Corinthians 4:5).

Paul was called to be an apostle, a term used for Jesus’ original twelve disciples. Why then was Paul called an apostle since he was not among the Twelve? “He appointed twelve whom he called apostles” (Mark 3:14). Apostle, a transliteration of the Greek ajpov st olo~ (apostolos), literally meaning “one sent,” is used for “an ambassador.”2 Paul acknowledged this high sacred calling, yet always recognized his own unworthiness. “I’m the least of the apostles.I’m not even fit to be called an apostle because I persecuted God’s church” (1 Corinthians 15:9).

As a servant and apostle of Jesus Christ, Paul was appointed by God to spread the gospel. The word appointed is from the Greek aphorizo, meaning “to separate or set apart.”3 “15But God, who appointed me before I was born and who called me by his kindness, was pleased 16to show me his Son” (Galatians 1:15-16). God chose Paul to preach and teach the good news that His Son, Jesus Christ, came to the earth, died on the cross, was buried, arose from the dead, and ascended to the Father in heaven.

1:2 (God had already promised this Good News through his prophets in the Holy Scriptures.

The Old Testament repeatedly pointed to the coming of Messiah, God’s Anointed One. Every animal sacrifice given as atonement for sin on the altar in the tabernacle or temple foreshadowed God’s giving of His Son, the Christ (Messiah) as the final atonement for all sin. “25Then Jesus said to them, ‘How foolish you are! You’re so slow to believe everything the prophets said! 26Didn’t the Messiah have to suffer these things and enter into his glory?’ 27Then he began with Moses’ Teachings and the Prophets to explain to them what was said about him throughout the Scriptures” (Luke 24:25-27). The tabernacle in the wilderness and the temple in Jerusalem symbolized Christ’s coming. The New Testament accounts of Jesus’ life, death, and resurrection thoroughly fulfilled the Old Testament prophecies. No passage more explicitly foretells the suffering Messiah than Isaiah chapter fifty-three:

3He was despised and rejected by people.

He was a man of sorrows, familiar with suffering.

He was despised like one from whom people turn their faces, and we didn’t consider him to be worth anything.

4He certainly has taken upon himself our suffering and carried our sorrows,

but we thought that God had wounded him,

beat him, and punished him.

5He was wounded for our rebellious acts. He was crushed for our sins.

He was punished so that we could have peace,

1:3 This Good News is about his Son, our Lord Jesus Christ. In his human nature he was a descendant of David.

Jesus Christ is God’s Son Who came to earth from His Father’s throne. As a man, He was descended from King David.

Matthew’s gospel presents Jesus as the promised descendant of David by tracing Jesus’ genealogy from Abraham through David to Joseph. It should be noted, however, that Matthew 1:16 specifically identifies Joseph as the husband of Mary, not the father of Jesus. Luke’s gospel presents Jesus’ humanity by tracing His ancestry backward from Mary through David to Adam and ultimately to God through Creation. The angel Gabriel informed Mary of Jesus’ unique person.

30The angel told her,

“Don’t be afraid, Mary. You have found favor with God.

31You will become pregnant, give birth to a son, and name him Jesus.

32He will be a great man

and will be called the Son of the Most High.

The Lord God will give him

Therefore, through the miraculous virgin birth, God sent His Son into the world as the perfect, sinless God-Man. Donald Grey Barnhouse, a noted preacher and teacher on the Book of Romans, notes, “If Jesus had been the son of Joseph, He would have been, just like every other man, accursed and could never have been Messiah.”4

1:4 In his spiritual, holy nature he was declared the Son of God. This was shown in a powerful way when he came back to life.

Jesus Christ was not only born the Son of God, but He has been eternally the Son of God. Jesus is, in fact, God indwelling human flesh. “1In the beginning the Word already existed. The Word was with God, and the Word was God. 2He was already with God in the beginning . . . 14The Word became human and lived among us. We saw his glory. It was the glory that the Father shares with his only Son, a glory full of kindness and truth” (John 1:1-2, 14).

The New Testament affirms Christ’s deity. For example, in announcing Jesus’ birth to Mary, the angel said: “The Holy Spirit will come to you, and the power of the Most High will overshadow you. Therefore, the holy child developing inside you will be called the Son of God” (Luke 1:35). God the Father identified Jesus Christ as His Son. “16After Jesus was baptized, he immediately came up from the water. Suddenly, the heavens were opened, and he saw the Spirit of God coming down as a dove to him. 17Then a voice from heaven said, ‘This is my Son, whom I love—my Son with whom I am pleased’” (Matthew 3:16-17). When Jesus died, the Roman officer declared, “Certainly, this man was the Son of God!” (Mark 15:39). After His resurrection and ascension, the apostles affirmed this fact in their preaching:

God has fulfilled the promise for us, their descendants, by bringing Jesus back to life. This is what Scripture says in the second psalm:

In this verse, the apostle Paul declares this truth as confirmed by Jesus’ resurrection.

1:5-6 5Through him we have received God’s kindness and the privilege of being apostles who bring people from every nation to the obedience that is associated with faith. This is for the honor of his name. 6You are among those who have been called to belong to Jesus Christ.)

Jesus Christ, the eternal Son, conveys God’s kindness both for salvation and service. “8God saved you through faith as an act of kindness. You had nothing to do with it. Being saved is a gift from God. 9It’s not the result of anything you’ve done, so no one can brag about it. 10God has made us what we are. He has created us in Christ Jesus to live lives filled with good works that he has prepared for us to do” (Ephesians 2:8-10). Kindness is the Greek word charis, often translated “grace,” meaning “undeserved favor.”5 No one merits this gift, so we receive it only through believing in Christ and receiving His sacrifice on our behalf. “12However, he gave the right to become God’s children to everyone who believed in him. 13These people didn’t become God’s children in a physical way—from a human impulse or from a husband’s desire to have a child. They were born from God” (John 1:12-13).

Paul confessed his utter dependence on this gift. “But God’s kindness made me what I am, and that kindness was not wasted on me. Instead, I worked harder than all the others. It was not I who did it, but God’s kindness was with me” (1 Corinthians 15:10). Paul’s dramatic conversion described in Acts chapter nine was accompanied by a clear calling to be named one of the apostles. “From Paul—an apostle chosen not by any group or individual but by Jesus Christ and God the Father who brought him back to life” (Galatians 1:1). His calling, and ours, is solely for the honor of His name.

Furthermore, our calling to be God’s children and followers is no less special than Paul’s was. “God saved us and called us to be holy, not because of what we had done, but because of his own plan and kindness” (2 Timothy 1:9). We rest in God’s sovereign purpose. Experiencing His electing love should move us to thanksgiving that we are included in His plan of redemption.

1:7 To everyone in Rome whom God loves and has called to be his holy people. Good will and peace from God our Father and the Lord Jesus Christ are yours!

In his salutation to the believers in Rome, Paul pronounced his blessing on this young church. Although he would spend his final years with them (Acts 28), he had not yet met them and longed to visit them. This letter was written, not to everyone in Rome, but only to God’s “holy people.”6

Believers are God’s holy people only by His sovereign will and work. “9However, you are chosen people, a royal priesthood, a holy nation, people who belong to God. You were chosen to tell about the excellent qualities of God, who called you out of darkness into his marvelous light. 10Once you were not God’s people, but now you are. Once you were not shown mercy, but now you have been shown mercy” (1 Peter 2:9-10).

Although directed originally to the Christians at Rome, this letter is a part of God’s holy Word, intended for all believers in every age. “16Every Scripture passage is inspired by God. All of them are useful for teaching, pointing out errors, correcting people, and training them for a life that has God’s approval. 17They equip God’s servants so that they are completely prepared to do good things” (2 Timothy 3:16-17).

With this in mind, let us apply ourselves to this study of Romans with due diligence, awed by this masterpiece of Scripture and determined not only to hear it but also to obey it. “Do your best to present yourself to God as a tried-and-true worker who isn’t ashamed to teach the word of truth correctly” (2 Timothy 2:15).

Paul is a prime example of God’s amazing love and almighty power. Donald Grey Barnhouse made this astute observation: “If God could stoop to pick out the man who had been His greatest enemy and call him, equipping him to be His greatest messenger, then no one need feel that he may not be reached of God. God works through grace, not according to man’s deserts. Grace is the secret of salvation and grace is the secret of the calling of God.”7 Humbled by his past treachery in persecuting Christians, Paul was driven by a divine desire to serve His Lord faithfully. “6My life is coming to an end, and it is now time for me to be poured out as a sacrifice to God. I have fought the good fight. 7I have completed the race. I have kept the faith” (2 Timothy 4:6-7).

As believers, we are to be humbled by our past without being enslaved to it. We do not live under the burden of guilt for our sins because God has forgiven us. Therefore, like Paul, we can serve Him with confidence.