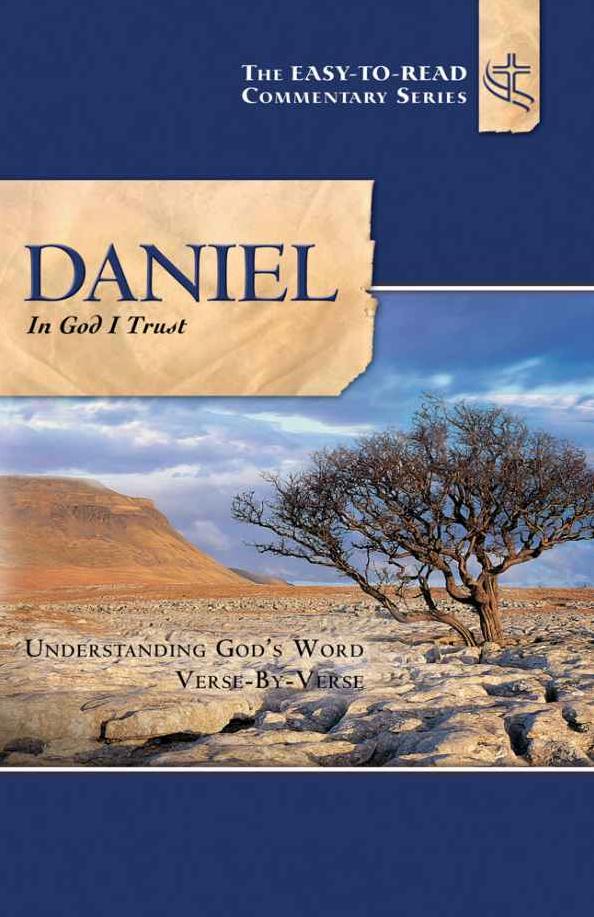 In God I trust

The prophet Daniel was a man both tested and exalted. His commitment to the Lord God Almighty never fluctuated. He relied upon God for both life-saving miracles and the smallest of provisions.

In this intriguing book, we will examine this one man’s unwavering faith in his God, beginning from the time that he arrived in Babylon as a young Jew and continuing throughout his years of service under the authority of several kings and kingdoms. There is perhaps no better example of godly faith, dependency, trust, and worship than in the character of the prophet Daniel. He was faithful to God and commendable before men.

"This chapter by chapter and verse-by-verse exegesis of the wonderful prophetic work of Daniel—in itself one of the most readable books of the Bible—is a triumph. This major collaborative undertaking provides a format for devotional study that challenges any other work of its kind. For any reader with a thirst for irrefutable Bible knowledge, this scholarly but practical approach to the study of Daniel is enthusiastically recommended."

Book on Daniel $12.99 In stock
Product description: The prophet Daniel was a man both tested and exalted. His commitment to the Lord God Almighty never fluctuated. He relied upon God for both life-saving…

1:1 In the third year of the reign of King Jehoiakim of Judah, King Nebuchadnezzar of Babylon came to Jerusalem and attacked it.

Jehoiakim began his rule of Judah in 609 b.c. This verse dates itself as 606 b.c., the third year of his reign. The Hebrew name Jehoiakim means, “Jehovah will set up.”1 We know from other Scriptures that Jehoiakim became king when he was twenty-five years of age, and that he collected heavy taxes for the pharaoh of Egypt (2 Kings 23:35–36). Jeremiah, a prophet of God who lived during Daniel’s time, warned Jehoiakim of divine judgment unless retribution was made. God gave this king three years to repent, but Jehoiakim treated the matter with contempt (Jeremiah 36:1–3). Therefore, in the third year of Jehoiakim’s reign, God judged Jehoiakim by allowing Nebuchadnezzar to besiege Jerusalem.

Sometimes, we associate the word besiege with a swift, violent overthrow. In this situation, though, Nebuchadnezzar came to Jerusalem to conquer the city and to make its inhabitants loyal to him. Up to this point, the confrontation had been relatively nonviolent, though later there would be much bloodshed.

Solomon’s temple, which Nebuchadnezzar looted, was magnificent, as were all of its furnishings. Riches like these had not been seen since Solomon’s actual reign. The stolen vessels were ornaments that the king had made specifically for the temple, so they were all exceptionally beautiful (2 Kings 24:13; 2 Kings 25:15). Nebuchadnezzar carried these goods into the land of Shinar in which the city of Babylon was located. “Nebuchadnezzar also brought some of the utensils of the Lord’s temple to Babylon. He put them in his palace in Babylon” (2 Chronicles 36:7).

1:3 The king told Ashpenaz, the chief-of-staff, to bring some of the Israelites, the royal family, and the nobility.

Ashpenaz was the master of the eunuchs, loyal servants of the king. As a requirement, eunuchs were castrated so that they would not desire women, least of all the king’s wives and his daughters.2

The fact that Ashpenaz was asked to bring royal Israelites meant that they were descendants of King David, the second king of Israel who received God’s promise that his family would always rule. David was from the tribe of Judah, so also was Daniel and his friends.

1:4 They were to be young men who were healthy, goodlooking, knowledgeable in all subjects, well-informed, intelligent, and able to serve in the king’s palace. They were to be taught the language and literature of the Babylonians.

The king further directed Ashpenaz to choose young men who were without physical blemish. They were to be physically attractive and “knowledgeable in all subjects,” which indicated that they were to display discernment and sensibility in words and in actions.

In addition, they were to possess the intellectual aptitude to learn the Chaldean language, customs, and culture. In the Babylonian Empire, the Chaldeans were the dominant race and were considered extremely intelligent. These captives, with their ability to learn and to understand the Chaldean language and culture, ranked among the elite of the Jewish captives. They were to be young people competent to stand in the king’s court as physically, morally, and mentally exceptional individuals, those of whom the king could be proud.

These men were chosen because they possessed these qualities as judged by their fellow man, yet they were given these characteristics by Almighty God. They were God’s chosen people, singled out and set apart by Him. Because of their Jewish heritage and their special relationship with Jehovah, they could trust His leading in every aspect of their lives, even as they experienced the cruel circumstances of captivity.

1:5 The king arranged for them to get a daily allowance of the king’s rich food and wine. They were to be trained for three years. After that, they were to serve the king.

Once these young people were chosen, they were brought into the king’s palace in Babylon and served the choicest meats and the finest wines. Their meals were selected by and suitable for the king himself. By worldly standards, this was the best food and drink available since they were the same provisions consumed by the king.

This was not just a special favor that happened every so often. It was a daily regimen. For three years the captives were to partake of this food. At the end of that time, they were to stand before King Nebuchadnezzar as beautiful, seemingly perfect human beings.

1:6 Among these young men were some Judeans: Daniel, Hananiah, Mishael, and Azariah.

These four—and presumably all of the captives—received new Babylonian names. This was probably an attempt to dissociate the captives from their Jewish culture and identity. Daniel’s new name, Belteshazzar, means “lord of the straitened’s treasure.” Hananiah’s name, Shadrach, means “the breast was tender.” Mishael’s new name, Meshach, means “waters of quiet.” Azariah’s name, Abednego, means “servant of brightness.”4 The king delegated the mundane task of renaming the Jewish captives to the head eunuch.

King Nebuchadnezzar seized the Israelites and carried them back to his kingdom in Babylon. As a result, the Israelite captives found themselves in a foreign land and strange culture. Not only were they forced to leave their homeland, but they were also expected to deny their native religion and to embrace the Babylonian pagan gods. “‘I will punish them for these things,’ declares the Lord. ‘I will punish this nation’” (Jeremiah 5:9). Among these captives were Daniel, Hananiah, Mishael, and Azariah. It seems quite likely that these four and the other Israelites became homesick for Judah, their homeland.

When we ask Jesus Christ to forgive our sins and to be the Lord and Savior of our lives, we identify ourselves with Him. Being His children puts us at conflict with the world, its people, and its values. “18If the world hates you, realize that it hated me before it hated you. 19If you had anything in common with the world, the world would love you as one of its own. But you don’t have anything in common with the world. I chose you from the world, and that’s why the world hates you” (John 15:18–19). However, as children of God, we need to remember that we, like the captive Israelites in Babylon, are not at home in this world. God has something much better in store for us. “Instead, these men were longing for a better country—a heavenly country. That is why God is not ashamed to be called their God. He has prepared a city for them” (Hebrews 11:16). Our eternal home is with God in heaven as “fellow citizens” with our Christian friends and loved ones. “That is why you are no longer foreigners and outsiders but citizens together with God’s people and members of God’s family” (Ephesians 2:19).

Are we homesick today for our promised home in heaven? We should be. This life is not the end but the beginning of our journey. We are just passing through this world on our way to a glorious eternity!