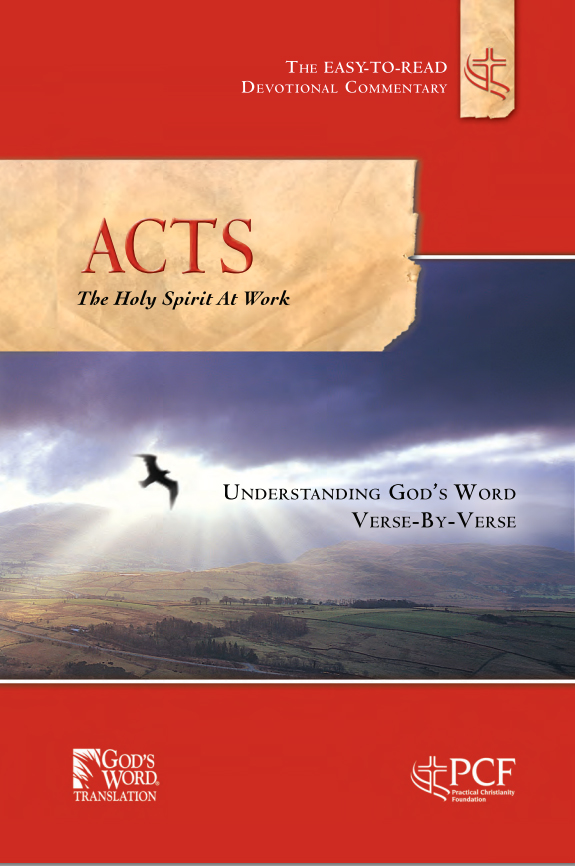 The Holy Spirit at work

The Gospel is spreading

In this powerful narrative, Luke records specific historical events marking the crucial moments of transition from Jesus’ physical departure from earth (ascension) to the coming of the Holy Spirit to earth, focusing on the commission of the apostles and the beginning of the ministry of the Church of Jesus Christ in spreading the Gospel beyond Jerusalem to the ends of the world. Luke outlines an investigative historical narrative, detailing the works of the Holy Spirit through the apostles – primarily Peter, Stephen, and Paul. Although Luke’s narrative was addressed to an individual Acts 1:1, it is equally relevant to the Church of Jesus Christ across the ages.

This verse-by-verse devotional study, complete with engaging commentary and practical life applications, will renew your appreciation of the grace of God in your own life and challenge you to pursue a closer walk with Christ. As you embark on this journey, surrender yourself to the living Word of God to inspire you to share the fundamental message of the gospel with others: we are reconciled to the Father not by our works, but only by the sacrifice of Jesus Christ.

This extensive Devotional Commentary candidly addresses various controversial issues and offers challenging devotional thoughts and precepts, assuring the redeemed and warning the unsaved about the unchanging Truth of God's Holy Word. May we heed the words of Christ and open our ears to "hear what the Spirit says to the churches."

This verse-by-verse roadmap of the book of Acts provides a clear account of the early days of Christ’s apostles and the church. You will appreciate what PCF has done in simplifying the narrative and uncovering new and exciting insights.
Jim Bolthouse, President The Presidential Prayer Team
Largest fulltime prayer fellowship focused on our nation, its leaders, and our military.

Book on Acts $19.99 In stock
Product description: The Gospel is spreading In this powerful narrative, Luke records specific historical events marking the crucial moments of transition from Jesus’ physical…

9:1–2 1Saul kept threatening to murder the Lord’s disciples. He went to the chief priest 2and asked him to write letters of authorization to the synagogue leaders in the city of Damascus. Saul wanted to arrest any man or woman who followed the way [of Christ] and imprison them in Jerusalem.

While the Holy Spirit was growing His church through the witness of the apostles and Philip, Saul continued to oppose the “new sect.” He relentlessly pursued those who followed Jesus Christ as he had in the past (8:1–3).

Saul was a “good” man. He was a Greek-speaking Jew from the metropolitan city of Tarsus. He had the best education a Jewish man could ever hope to have. Gamaliel, a prominent member of the Sanhedrin, was his teacher and mentor. He was an ardent student of the Scriptures and was passionately devoted to the sect of the Pharisees. From his perspective, the murder of those who opposed the rabbinical traditions disobeyed the Law of Moses. Anyone who stepped across this line was worthy of death, even as Jesus had been.

Incensed by the growing Christian population, Paul went to the chief priest, Caiaphas, and asked him to write letters showing the synagogue leaders that he was given authority from the highest Jewish court to arrest people who followed Christ. He was not the executioner, but he was the arresting officer that determined to arrest these people and prosecute them for their affront to their Jewish traditions.

9:3 As Saul was coming near the city of Damascus, a light from heaven suddenly flashed around him.

Saul was so angry that he traveled far and wide to pursue his goal of eradicating Christians from the land. Damascus is 160 miles northeast of Jerusalem, a good six-day journey.1 This was far beyond the region under the authority of the Jewish court. Nevertheless, it is possible that the Romans permitted a degree of wide-ranging autonomy for the Sanhedrin to pursue matters of religious importance.2 However, Saul did not consider distance and legal ramifications to be a major obstacle. He decided to do whatever was necessary to stop the Christian “heresy” from its dangerous threat to the purity of the religion of the Jewish people.

However, God had other plans for Saul. As he approached Damascus, a flash from heaven arrested his progress. This may have been similar to a flash of lightning. From Saul’s perspective, it was a supernatural event. It may have been like lightning, but to see lightning on a clear day that was brighter than the sun could never be explained in human terms (Acts 26:12–14).3

9:4 He fell to the ground and heard a voice say to him, “Saul! Saul! Why are you persecuting me?”

Momentarily stunned by the sudden flash of light, Saul fell to the ground. A voice addressed him by name, asking Saul why he was persecuting the owner of the voice. Those traveling with Saul watched what was happening. Later, Paul would report that every-one heard the voice, although no one saw the owner of the voice. However, only Paul understood the words (22:9). He stated that the person spoke to him in Hebrew, the native tongue of the Jewish people (26:14).

Paul fervently, passionately believed that he was doing God’s work. He felt called to defend the religious traditions handed down to him through generations of patriarchs, kings, prophets, and rabbinical teaching. However, the speaker redefined Paul’s vigorous pursuit of the Christian faithful. The speaker asked Paul why he was persecuting, not the followers of Christ, but the speaker himself. In one swift statement, the speaker forced Paul to look at his religious devotion from an entirely different perspective.

Bewildered and somewhat disoriented, Saul had no idea who was speaking to him. Wondering what was going on, Saul asked the speaker to identify himself. The person replied without hesitation, stating that He was Jesus.

Saul neither spoke to Jesus nor saw Him during His earthly ministry. However, he heard a lot about Jesus during his days in Jerusalem studying at the feet of Gamaliel. The subject of Jesus was constantly on the minds of the leaders of the Jews. They had put Him to death, yet the story of His resurrection was everywhere. The number of His followers was growing at an alarming rate. The story that the Sanhedrin had perpetrated was that Jesus’ disciples had stolen His body. Saul believedthat story. While he had every intention of wiping out these “blasphemers,” he now was suddenly stopped dead in his tracks by a flash of lightning and a Person Who could not be seen because of His blinding brilliance, introducing Himself to Saul as Jesus.

Jesus gave Saul his marching orders. He could now continue on his journey to Damascus. But instead of breathing out threats against the followers of the Way, he would have to wait for further orders. He had no idea where he was to go inside the city. Jesus just told him to go.

9:7 Meanwhile, the men traveling with him were speechless. They heard the voice but didn’t see anyone.

The men traveling with Saul were probably some of the temple guards, dispatched to help Saul in his sworn duty to arrest and imprison the followers of Jesus. They saw the bright flash of light and they heard the voice, but they didn’t see anyone. We know that Saul was blind after the encounter and it is possible that these men were also momentarily stunned by the whole experience. The expression stating that they were speechless indicates that they were terribly frightened. They too were aware that something extraordinary was happening, but not knowing the source of the voice terrified them.

Saul was the number one enemy of Christian believers. He liked it that way. There was nothing that pleased him more than to be found in the service of the living God, stamping out those who did not follow Moses’ Teachings to the letter of the law. No obstacle was too great for Saul to overcome in his pursuit of the followers of the Way. He was determined by the convictions of his schooling as a Jew to maintain the purity of “God’s way.” No one, even those armed with the most sophisticated logical arguments, would dissuade what he fundamentally believed to be the “Word of God.” Saul had all the weapons necessary to do the job. He was a brilliant student trained in the traditions of the Pharisees. He was obedient to every precept of the Law. He possessed a passionate, almost obsessive zeal to be the best person God could expect him to be. An astute mind filled with the principles of the Scriptures and morally upright in every aspect of the Jewish Law (Philippians 3:5–6), Saul was just the man for the job. Armed with letters of authorization from the high priest and fortified with a contingency of temple guards, Saul set about the task of wiping out anyone who professed to know and follow Jesus Christ.

No one could convince Saul that he was wrong in all aspects of his theology and, yes, his moral uprightness. But God could! In one of the most dramatic conversions ever recorded, Saul was suddenly blinded by a flash of light. Jesus, very much alive and reigning on high, arrested this keenly religious man and stopped his assault on God’s people.

Was Saul looking for Jesus? Was Saul seeking truth—God’s Truth? Was Saul on some search for his identity as a son of Abraham? Absolutely not! Saul knew who he was. Saul knew the Word of the Lord. Saul committed himself to absolute obedience of that Word. Saul knew what was required of him. Saul knew that anyone who did not agree with the Law of Moses needed a severe course correction.

But Jesus was looking for Saul! Jesus wanted Saul to be His witness to the Gentile people of the world. Jesus wanted Saul for Himself. So Jesus once again entered His creation in the blinding brightness of His glory and stopped Saul from continuing on his way to a Christless eternity. Jesus did what no mortal could do. Jesus stopped Saul, told Saul Who He was, and told him to be prepared to follow His orders from that point on. Jesus, in one mind-boggling, heart-stopping instant gave Saul a new direction for his life. He who believed he served the Lord with every fiber of his being met the Lord Jesus in that encounter on the Damascus road, and the world was changed forever.