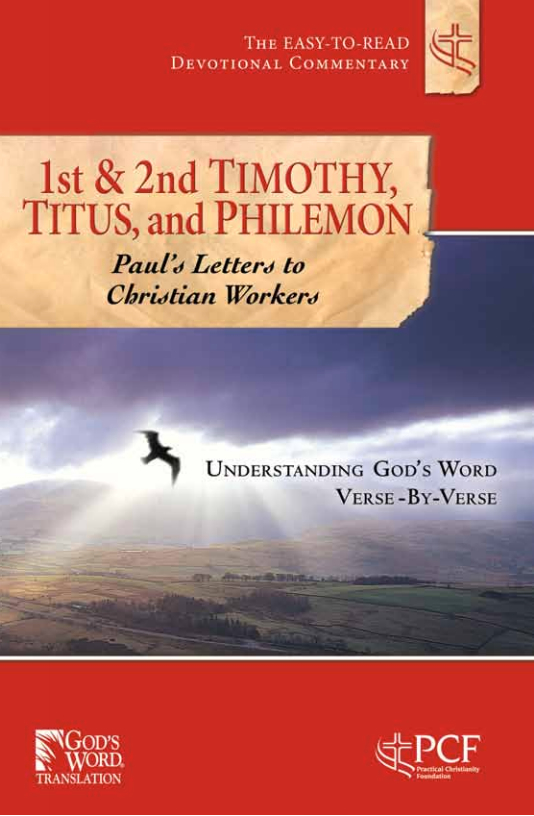 Paul's letters to Timothy, Titus, AND Philemon offer practical instructions to Christian leaders and workers. Written by the apostle well-schooled in debate and persuasion, the inspired words of these theologically rich and practically viable epistles provide godly wisdom to churches across the ages in the administration and direction of the Lord's work, by faithfully applying God's timeless truth recorded in these small yet powerful books.

"The PCF Commentary Series is an invaluable tool. It gives a fresh perspective on what the bible tells God's people, with practical instructions for pastors,teachers, and church leaders.
Chris Gates
Youth Pastor

Book on 1st Timothy through Philemon $14.99 In stock
Product description: Guiding the Servant Paul's letters to Timothy, Titus, AND Philemon offer practical instructions to Christian leaders and workers. Written by the apostle…

Paul opened his letter to Timothy by defining his office in the work of Christ’s kingdom. Paul did not take on this task because he wanted it. Rather he was assigned to be an apostle of Christ Jesus by the authority of God. Often Jesus Christ is held up as the believer’s Savior, but here Paul stated that God was the believer’s Savior, not because Jesus did not die for the sins of the world, but because God gave Jesus, His Son, to die for the sins of the world. Under that authority Paul could firmly state that Christ Jesus was his confidence. The confidence that motivated Paul throughout his life was not some self-induced pride in what he did, but in the Person of Christ Himself. In his own humanity, Paul always acknowledged his weakness, but in Christ that weakness was wept away in the victory that Christ won over sin, death, and hell (Romans 7:24–25).

1:2 To Timothy, a genuine child in faith. Good will, mercy, and peace from God the Father and Christ Jesus our Lord are yours!

Paul addressed the letter to Timothy, not only his companion in the work and ministry of evangelism, but also a young man whom he regarded as his own child in the faith.

Immediately after his address, Paul continued in the normal structure of a salutation by conferring God’s good will, mercy, and peace on Timothy. He really put forth the framework in which and through which Paul wrote this letter and Timothy should receive its instruction. Indeed, it is this framework in which every believer should receive the instruction of God’s Word. These gifts are given when the Holy Spirit completes His work of regeneration in the hearts of sinners. These attributes of the redeemed life belong to God’s people because of the intercessory work of Jesus Christ seen in His atoning death, resurrection, and ascension. God alone imparts grace, mercy, and peace to those He has chosen. Nothing in this world can provide the depth of comfort and satisfaction provided by the reconciliation the Son of God purchased by His sacrificial death.

1:3–4 3When I was going to the province of Macedonia, I encouraged you to stay in the city of Ephesus. That way you could order certain people to stop teaching false doctrine 4and occupying themselves with myths and endless genealogies. These myths and genealogies raise a lot of questions rather than promoting God’s plan, which centers in faith.

When Paul was going to Macedonia, he advised Timothy to remain in Ephesus. They had journeyed through Phrygia, Galatia, Mysia, Troas, Philippi, and Berea.1 Paul needed his most trusted emissary to correct the false doctrine that was creeping into the Christian community. Some people were preoccupied with myths and genealogies rather than focused on the work of Christ that had saved them. The result was their dependence on human stories that raised more questions than could be answered. In the process, God’s plan was pushed to the side and the work of proclaiming the Good News lost its driving forcefulness.

According to Webster’s New Collegiate Dictionary, a myth is “an ill-founded belief held uncritically.”2 The culture of these times was founded on a religious devotion mired in a host of mythological legends about numerous gods. These concepts continued to influence the thinking of those who had been redeemed and tended to confuse the clear Gospel message. Many Christians were put to death, not simply because they believed in Jesus, but because they refused to swear allegiance to this hierarchy of mythological gods.

Genealogies are the studies of family backgrounds. Knowing one’s background was not in itself a detriment to the Gospel. Nevertheless, Jewish believers still relied heavily on their heritage, showing that they were biologically the descendants of Abraham. They tended to use this heritage to enforce their will over those who could not prove any heritage, let alone a Jewish heritage. It became a wedge that separated Jew from Gentile in a way that attempted to prove the superiority of one over the other. This kind of debate was useless and occupied people’s time in fruitless endeavors.

1:5 My goal in giving you this order is for love to flow from a pure heart, from a clear conscience, and from a sincere faith.

Paul was instructing Timothy to correct the Ephesian church with true doctrine that would result in a genuine attitude of God’s love flowing from a heart unencumbered by foolish, useless debates about things that really didn’t matter. For this goal to be achieved, Timothy had to rid the believing community from the effects of a culturally influenced belief, purifying the heart with the clearly defined Gospel of Jesus Christ.

The Ephesian believers had wavered from the clear, concisely stated message of God’s redemption that Paul had declared to them. They needed Timothy’s strong hand to bring them back from their wandering pathways. They needed to renounce the influences of the corrupt culture, which had captured the imagination of their sin nature and return to the Lord who had brought them from that darkness into the light of His salvation. Their consciences needed to be cleared from the twilight regions of a halfhearted profession of faith that did not fully restore one to the Lord who created them. Only the unadulterated, sincere faith imparted to the believer through the teaching of the Holy Spirit would restore them fully to the fellowship of the Lord and His people. Paul simply wanted the Ephesian believers to experience the tremendous exhilaration of living in full submission and single-minded devotion to the Lord. “We are proud that our conscience is clear. We are proud of the way that we have lived in this world. We have lived with a God-given holiness and sincerity, especially toward you. It was not by human wisdom that we have lived but by God’s kindness” (2 Corinthians 1:12).

1:6 Some people have left these qualities behind and have turned to useless discussions.

Many believers become trapped by the negative influences of the culture from which they have been snatched by the regenerating work of the Holy Spirit. As such, they forsake their calling in Christ and the qualities of love, pure heart, good conscience, and sincere faith are left behind. They become preoccupied with “useless discussions.” Many of these discussions are false, many are majoring on minor issues, others are senseless, foolish questions, and others are silly and very unprofitable. In his letter to Titus, Paul advised: “Avoid foolish controversies, arguments about genealogies, quarrels, and fights about Moses’ Teachings. This is useless nonsense” (Titus 3:9). In the early church, some of the worst offenders were those with a Jewish background. “There are many believers, especially converts from Judaism, who are rebellious. They speak nonsense and deceive people” (Titus 1:10). Paul is telling Timothy to find these people who are causing these problems and in love show them the truth (Ephesians 4:15).

1:7 They want to be experts in Moses’ Teachings. However, they don’t understand what they’re talking about or the things about which they speak so confidently.

Many people aspire to be teachers, not because they love the Lord, but because of the respect they can garner from their position. The people that troubled the Ephesian church were self-seeking teachers who didn’t understand the truth of the Gospel and therefore wrongly interpreted what the Old Testament Scriptures were saying about Jesus (Luke 24:44). They had no Spirit-guided perception of the subject matter of God’s Word. They could recite the history, the stories, and even the Psalms. But they had absolutely no idea what they meant. They did not realize that they all spoke of Jesus. They intellectually knew the Mosaic Law, but they did not understand the spirit of the Law, the intent of the Law, the safety of the Law, and the purity of the Law. They did not comprehend the love that God showered on humanity as He carefully revealed His redemptive plan that would lift people out of the darkness of their sin. In their folly, they had no idea that they were bad. The opposite was true. Because of their forceful delivery, they felt that they knew the mind of God and laid out their theological strategies with misguided confidence.

Paul was deeply concerned about the welfare of the churches that were established through his ministry. When the people veered from the simple truth of the Good News about Christ’s redemption and the forgiveness of their sins, he made every effort to correct them by his letters or by sending an emissary to personally oversee the correction of wrong doctrine.

Paul’s letter to Timothy is another example of Paul’s abiding concern for the church in Ephesus. In this letter, Paul was not addressing the church directly as much as he was helping Timothy to understand his responsibilities, providing practical guidance to the man he had placed in charge of the church’s correction.

Paul reminded Timothy that the overriding qualities of the believer’s life were to be found in purity, a clear conscience, and a genuine faith. This was the goal. This was the framework in which all believers were to live in relationship to their Lord. When this goal was achieved, then the love of God flowed from the hearts of believers. This is not a matter of theological accuracy, although these qualities are cultivated in adherence to the apostles’ doctrine. Rather, this is the practical outcome of good doctrinal understanding.

Peter, leader of the apostles and co-laborer of Paul, provided a wonderful summation of this principle: “Love each other with a warm love that comes from the heart. After all, you have purified yourselves by obeying the truth. As a result you have a sincere love for each other” (1 Peter 1:22).