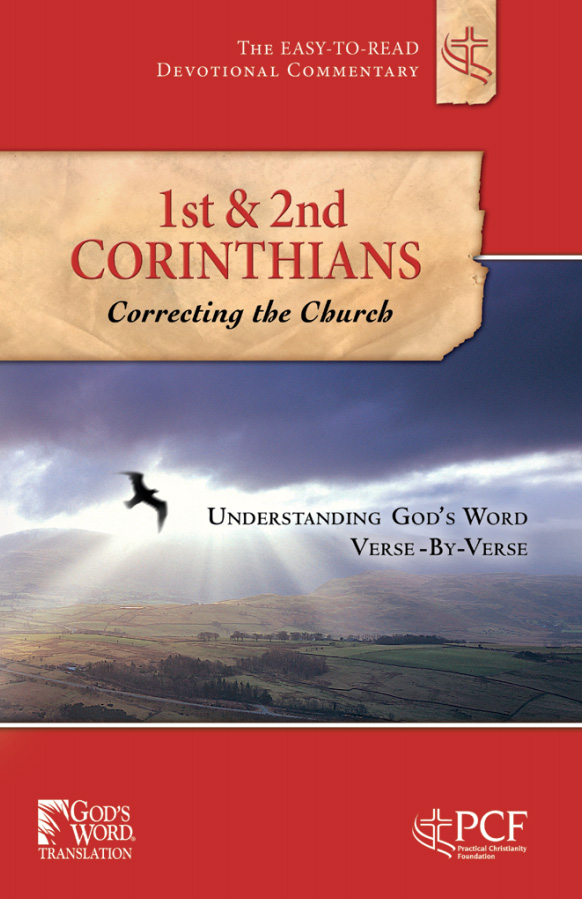 Bible Commentary on Paul's letters to the Corinthians

In his epistles to the Corinthian Church the apostle Paul confronted the immorality, doctrinal confusion and frequent disputes that had become commonplace among the Corinthian believers. Paul’s message to this church was simple yet powerful: Consider the values of Christ’s redemption and realign your thinking with God’s instructions. Although these letters were written to admonish, instruct and encourage the early church, they are just as relevant to us today. This verse-by-verse devotional study, complete with engaging commentary and practical life applications, will challenge you to pursue a closer walk with Jesus Christ and grow in the faith.

If you seek transformation of your spirit that will deepen your walk with Yeshua, this text is for you….Let this commentary help you to have fellowship with the Father through the writings of Paul. It will transform those who embrace the truth.

Book on 1st & 2nd Corinthians $15.99 In stock
Product description: In his epistles to the Corinthian Church the apostle Paul confronted the immorality, doctrinal confusion and frequent disputes that had become commonplace…

1 Corinthians 15:12–19 15:12 If we have told you that Christ has been brought back to life, how can some of you say that coming back from the dead is impossible?

Following the affirmation of the truth about the Gospel that the Corinthians first heard and believed, Paul confronted them about their faithfulness to its message. Did the Corinthians understand the true essence of the object of their faith? Were they committed to its teachings? Knowing the essential message of the Gospel was the death, burial, and resurrection of Jesus Christ, how could they deny that it was possible for the dead to be raised? Did they no longer believe in His resurrection for their salvation as they first heard it? (Romans 10:9).

Paul’s question expressed surprise in the conclusion that the Corinthian believers arrived at. It denied the essence of their faith. After all the evidence that he had presented to them, how could they still deny this most fundamental tenet of their faith? Paul wondered why the Corinthians would question their faith in the Gospel after listening to people who challenged Paul’s message. If they believed that Christ rose from dead, how could they be persuaded to accept a teaching that negated the faith that resulted in their salvation? (Galatians 3:1).

The denial of the resurrection is more significant than simply contradicting the fact of Christ’s resurrection. Since Christ’s resurrection is the focal point of the entire gospel message, any denial of this fact seriously undermines the promise of God’s redemption. If Christ did not come back to life, then the hopes and promises offered by the gospel message are meaningless. If the Lord never rose from the dead, then His assurance to overcome death would be completely false. If Jesus did not rise from the dead, then the salvation Paul preached was useless.

Since the denial of the resurrection of the dead effectively denies Christ’s resurrection, then the faith of believers was useless. Their faith would be empty because the object of their belief was predicated on a lie. In the end, the Corinthians would have put their confidence in the useless message of false preachers if Christ’s resurrection were fiction. However, Paul asserted that Jesus did come back to life. Peter, another of the Lord’s apostles, also declared the importance of this single fact: “Blessed be the God and Father of our Lord Jesus Christ, who according to His abundant mercy has begotten us again to a living hope through the resurrection of Jesus Christ from the dead” (1 Peter 1:3, NKJV).

The denial of the resurrection has more serious implications than just the contradiction of one’s belief in the risen Lord. If there were any truth in such a denial, then faith would be futile. If the dead do not rise, then the messengers of the resurrection would be liars. If that were true, they would be false witnesses of a lying God Who falsely promised the resurrection of the dead. In denying the resurrection, some of the Corinthians questioned the validity of this particular doctrine. They effectively took a blasphemous position against God by attempting to debunk His truth. They could ignore Him because He was the author of a lie. His witnesses were bearers of a fabrication proclaiming Christ’s resurrection. This did not undermine their faith. This destroyed it. They succumbed to their own corrupt imagination and reduced the God of their salvation to the status of a perpetrator of a lie. If the gospel message was false, their faith was likewise false. If what God said were true, then they were blaspheming God, Who did not spare His Son from death on the Cross to provide for their salvation.

15:17 If Christ hasn’t come back to life, your faith is nonsense and sin still has you in its power.

Some believers were still captive to the bondage of their sin because of their erroneous belief. The evidence of their position could be seen by their denial of the truth they first heard and believed. Certainly, if they did not believe the risen Lord for their salvation, then they would still be lost. If Christ never rose from the dead, then their faith was empty and they remained dead in their sin. One or the other is nonsense. Either Christ rose from the dead and the salvation He purchased was absolutely secure or Christ did not rise from the dead and the gospel message was nonsense.

15:18 Then those who have died as believers in Christ no longer exist.

The apparent permanence of death suggests that there is no hope for the living as well as for those who have died in Christ. In fact, the idea denies the sure hope believers have in God’s salvation (1 Thessalonians 4:13–18). Those who believe they are saved would have no hope of continuing in Christ. Death would be the end. The grave would hold its victims forever.

Their denial of the resurrection could not be dismissed simply as another viewpoint. Their doctrinal proposition opposed the Gospel. It attempted to annul the promise of Christ’s second coming and the gathering of the redeemed because it denied the eternal reality of the risen Lord and the truth of His resurrection. Both the dead and the living would ultimately perish when they died. There would be neither the judgment of the condemned nor the vindication of the redeemed. In effect, the denial of the resurrection of the dead ultimately lead to the conclusion that there was nothing eternal except death itself as the end, bringing all of life to meaninglessness and physical nothingness.

15:19 If Christ is our hope in this life only, we deserve more pity than any other people.

Life without the promise of the resurrection of the dead is futile. This was a grim prospect that contradicted everything for which Paul’s life stood. More importantly, it denied the historical accuracy of the disciples’ reports. If Christ were defeated by death and failed to rise, then the hope of faith in Him was futile. If that is all believers could anticipate from believing in Christ, then they are the most miserable creatures because they have invested their whole lives in a lie. This conclusion would make the suffering and persecution that Christians faced for believing in Christ worthless (Matthew 10:17–18; John 16:33; 2 Corinthians 4:8–11).

Paul encouraged the Corinthian believers to consider the logical inconsistencies between their initial faith and the latter positions about the fundamental principles of their faith. Paul took this approach in order to strengthen their position in the truth of the Gospel. Paul showed the Corinthian believers the foolishness of such logical inconsistencies in their perspective of the Gospel.

Like all believers across the ages, the Corinthians received salvation by believing in the finished work of Jesus Christ. That is, Jesus came to earth clothed in mortal flesh, dwelt on earth without sin, was offered up on the Cross as the eternal sacrifice for sin, was buried and rose from the dead on the third day, ascended to His Father, and will return in triumph to judge the living and the dead. The redeemed believe in Jesus Christ for their salvation because He has accomplished everything necessary to satisfy the righteousness and holiness of God Almighty.

These are non-negotiable essentials of the gospel message. They are not presented for consent, nor does any one’s positive or negative reaction matter in the approval or rejection of these truths. Paul challenged the Corinthians to examine their understanding to determine if they truly grasped the importance of the gospel message that they believed for their salvation. More significantly, he showed them the contradiction in rejecting the foundation of their faith while at the same time claiming to be saved on the basis of a truth they denied.

Paul refuted denying the resurrection of the dead by exposing the inconsistencies of the Corinthians as well as the true meaning and significance of the resurrection. The resurrection is the principal element of God’s eternal plan of redemption. Some of the Corinthians entertained a serious error about Christ’s resurrection because they relied on human resources in their attempt to understand matters relating to their new life in Christ. However, their thinking went in the wrong direction because the natural mind cannot fully perceive truths pertaining to the spiritual realm (1 Corinthians 2:14). Just as Paul corrected the Corinthians by pointing them to the Scriptures, God’s written Word is the only source for wisdom in understanding the true essence of His salvation and the precepts that keep the believer from being misguided by human error (James 1:5; Proverbs 3:5–6).