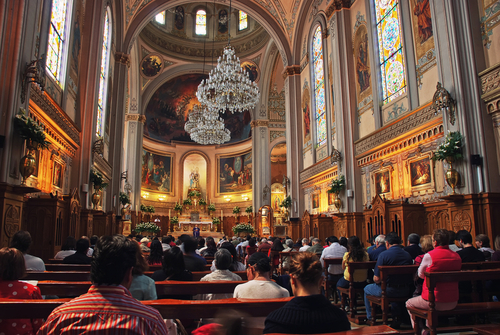 We are living in a time when the Church of Jesus Christ appears to be surrounded by enemies and disparaging critics on all sides. It is even more difficult to understand the internal controversies that embroil the Church from within its walls. The Church, like the surrounding culture, is sharply divided over a wide array of issues. The time, energy and resources of the Church are invested in bitterly fought battles that end up tearing the Church apart rather than drawing the Church together in a Spirit-mandated and Spirit-given unity.

Moreover, it seems that the church doesn’t really know what it believes anymore. Rather than seeing a forgiving, wholesome community, the world witnesses a fractured religious culture that is as much at war with different factions within its ranks as it is with the world around it. The world sees in the church a community of discontented believers comprising an institution which follows the world around it instead of leading sinners to the Lord through its ministries as a single-minded united Body of Jesus Christ, its Head. Could it be that the Church is failing to lead because it is failing to listen, obey, and follow its Head?

There is a large measure of truth in this assessment. Across the broad spectrum of the Christian culture forgiveness plays only a small part and unity seems to be but a hopeless dream. Nevertheless, some people cling passionately to the church culture in which they find themselves, causing many churches to survive rather prosperously, even though the gospel message may not be its driving passion.

To understand this troublesome landscape of Christianity we are forced to take a step back and see what we mean by the terms “forgiveness” and “unity”. We have been talking about forgiveness for three consecutive weeks and we believe that we have made a strong case for biblically defined forgiveness. We are a forgiven people and we are likewise to forgive others. We forgive others through the work of the Holy Spirit in our lives. Through Him, we really are able to forgive and, in so doing, we show others what it means to be a forgiven people. But, for the most part, we have been talking about personal situations where one person offends another. Forgiveness in the context of the corporate church, while following the same process in principle, is practiced in a dramatically different manner.

Within any church community, forgiveness is exercised within the framework of the entire church body. Forgiveness is tempered by faithfulness to the preaching and teaching of God’s Word. When Jesus told His disciples to go into all the world and make disciples, He not only told them what they were to do, He also told them how they were to accomplish this task. His disciples were to teach the world to observe all that Jesus commanded them. Here we understand that forgiveness must be subject to the clear presentation and analysis of what Jesus taught His disciples to obey.

Thus, when disobedience to the precepts of God’s revealed Word raises its ugly head, correction and discipline must prevail and forgiveness complemented by the repentance of the disobedient and his or her submission to the authority of the Lord, so that forgiveness would have its full restorative effect. This principle must be followed with those within any biblically faithful community of redeemed Christians. It must also be followed in the relationship forged between different believing communities.

How do forgiveness and correction affect the unity of the Christian body? While we wait for the next Article to address that question, let us take time to prayerfully consider the burning question: How can we as the Body of Christ be the light and salt of the world, if darkness and disunity continues to undermine our unity from within?